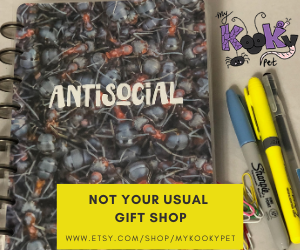 We found this queen randomly wandering in the grass in about April this year. She was effectively right on top of a very large Lasius flavus nest but within a stone’s throw of several Lasius niger, Lasius umbratus, Formica fusca, and Myrmica sp. (and a few others I haven’t been able to identify yet) nests. As she is quite small and yellowish, my suspicion was that she was a L. flavus, but it had definitely been too cold and early for nuptial flights. I was reluctant to keep her in case she already had a colony, but as the nearby L. flavus colony is massive, I thought it unlikely that she was the main queen, if she is even a satellite queen (the species is generally regarded a monogynae species). However, as there were quite a few very active L. niger worker pottering about, so I scooped her up in a test tube and kept her somewhere warm and dark.

So that’s the back story. She has been doing well and in today’s check, she had two little yellow workers and a pile of brood. They aren’t the bright yellow of most L. flavus I’ve seen, they’re a darker, almost light brown and she isn’t that yellow either, so we’ll have to get in with the macro lens to get better photos to ID her. 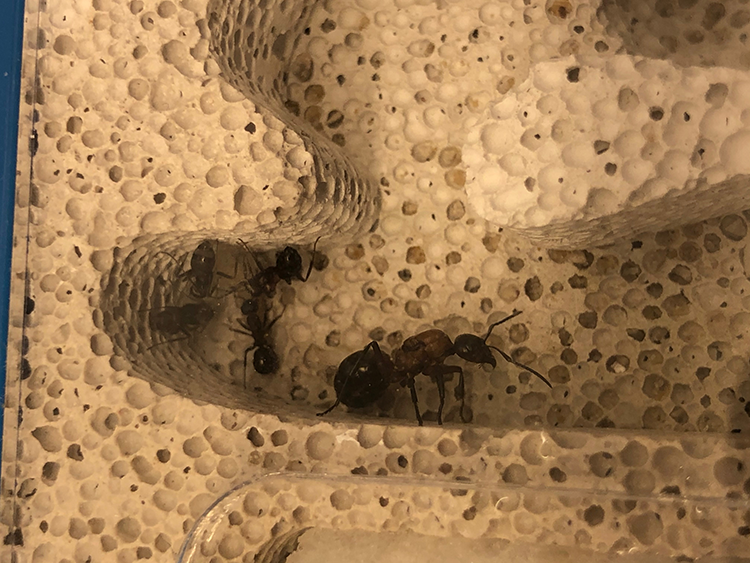 The queen and some of her workers. You can just see some brood under the workers.

This colony is growing slowly but surely. As with my smaller colonies in the past though, they’re quite fussy when it comes to protein. They turn their antennae up at anything “wormy” (think morio worm segments) but love flies. Perhaps it’s to do with the exoskeleton? I need to source a good supplier for curly-winged flies for them.

The queen is doing well. She’s active but hasn’t been laying many eggs. I try not to peek into the nest more than once a fortnight or so as younger colonies, particularly of Formica species, seem to get upset by this. Lasius don’t seem to mind too much. Maybe it’s because they seem to be less fast and “dashy” than Formica species? Anyway, she did seem to have some brood, so the plan is to offer plenty of protein to help encourage egg laying and brood raising. I’ve seen as many as two (of the six) workers out foraging at any one time. They seem to do that mostly in the mornings, so I try to dump in a few flies early on in the day. I’m feeding around 1-6 fruit flies a day.

The Camponotus nicobarensis ant colony, the Knickerbocker Glories, seem to be more active at the moment. I’ve been feeding them a bit more frequently to try and grow them on. I’ve got to give their set up a good old spring clean and consider our options for their move. I’d really love to get everything in the one unit, so I’m considering a tank set up with a nest attached to the side so we can see the queen and brood again. Important features apart from that will be:

At the moment, they have three - yes, three! - types of nest available to them (currently ytong, 3D printed and acrylic), but I’m planning on getting everything into the one tank, so I have to choose one. So will it be ytong, acrylic or natural? If you’re also considering which nest is best for YOUR colony, have a look at the article on choosing the best nest in Issue 5!

Stay tuned for more Knickerbocker updates and details on which nest I choose!

This 2020-caught colony has been doing really well. They’re in a test tube in an Ant Kit x Eden Formicaria outworld and the workers (around 20) are really getting active now. They’ve climbed up as high as the top of the tank before slipping down thanks to the PTFE (phew!). I have a second test tube in there in the hopes that they’ll move, but they seem to like their revolting mouldy one. There’s growing pile of brood and the queen is laying plenty of eggs. I put in what I thought was a dead fruit fly, but it had obviously just been stunned. It was recovering and preparing to take off but a worker found it, after much random running around, missing it (oooh, good antTV, right there!). She took down that fruit fly like a champ, even though it was bigger than her.

The Knickerbocker Glories are a colony of Camponotus nicobarensis purchased from British Ants in 2017. I named the queen BeyANTce and obsessed about this colony as it was our very first bought colony. At the time, we had a few test tubes of native UK species comprising mainly just single queens (I think there was a multi-queen Myrmica sp. set up and a dual-queen Formica fusca colony) with one or two workers.

BeyANTce and her girls came in this test tube but soon had to move house as things got crowded!

BeyANTce came with a few workers and for the first year or so, they were housed in various Antz for All modules. As each worker eclosed, we all got very excited. They have enjoyed a number of upgrades in terms of housing, as one of our largest colonies. Last year, in 2019, they began the year in a large acrylic tank with an Antz for All natural nest and an AntKit size 2 acrylic nest in it (I’m working on my nest extraction skills!). I upgraded them to a new, huge LC Ants arena with a size 1 ytong nest, but it all became unwieldy as I connected up the new bits and the stubborn ants refused to move out, but they did enjoy the new space!

Unfortunately for the ants, us humans also wanted an upgrade and in October 2019, we got started on some building works that meant that the room they were in was smashed up (along with much of the rest of the house!). They’ve been shuffled to somewhere not very handy and despite the air purifiers, I think the population has remained fairly stagnant or even dropped a little, but we have big plans for them this year!

I haven’t seen Queen BeyANTce in a while, but that’s not really surprising, I suppose. There are plenty of hiding spaces in there. I’ll track their progress on here and hopefully we’ll see these girls grow to be an even bigger colony! I’m planning on moving them (properly!) into a larger set up that will be easier to look after and more contained. So they’ll be moving house this year and will also be given a new bigger nest.

Stay tuned for more regular updates from the Knickerbocker Glories! 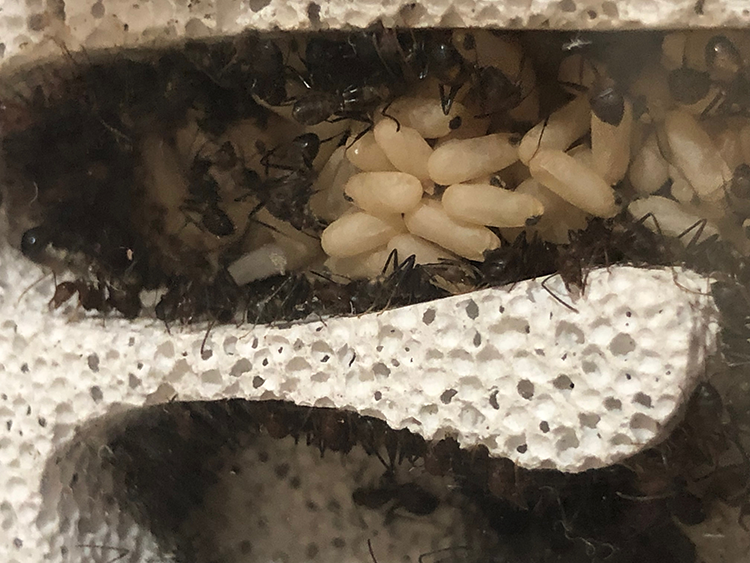 These ladies currently have two nests. The newer Ant Lab Fusion nest has now  been filling up with brood and three of the chambers are full of younger brood, while the pupae are stacked up solid in the older nest. Population explosion-fest, here we come! I still haven’t ordered the new nest as I’m undecided whether to go for a size 3 or size 4 (I want to get another Ant Lab Fusion nest). I’m thinking size 4 as there are two ports to connect it up to and I think that will be really useful.

Otherwise, the ants are doing really well. I feed them a morio worm every couple of days and about half an apple slice. They love apple. And flies. Especially flies. One protein all of the ants love is flies, so I’m trying to source a good supplier of curly-winged flies. In the meantime, I have a good supply of morio worms to keep them well-fed.

I remember back when I first got this colony, back in 2017. We actually got these girls from British Ants as a colony of 5-10 workers. They’ve certainly come a long way since then! Their first nest (once they outgrew the test tube) was a 3D printed nest from Antz for All, and they lived in a 3D printed ant city for a while. Now, it seems as if they’re in units connected up by tubes again, but this time, the units are much bigger!